The annual Eibach event is consider the Mecca Honda event at least on the West Coast as every year it brings in hundred of some of the best Honda builds around. Through the years, the event has changed venues a few times to accommodate the ever-growing attendance and finally settled at Storm Stadium in Lake Elsinore. With these past couple of years, I’ve been kind of less enthusiastic about the event each time mostly because due to the event being to open to whomever and whatever they bring, the quality of the cars at show has been dwindling. The vendor cars are always great, but the rest are a pain to walk through since 80% of them are incomplete projects. It used to be a single lot full on only the best of the best which was what made it special. There are still some solid builds, but I think there aren’t as many as there used to be. 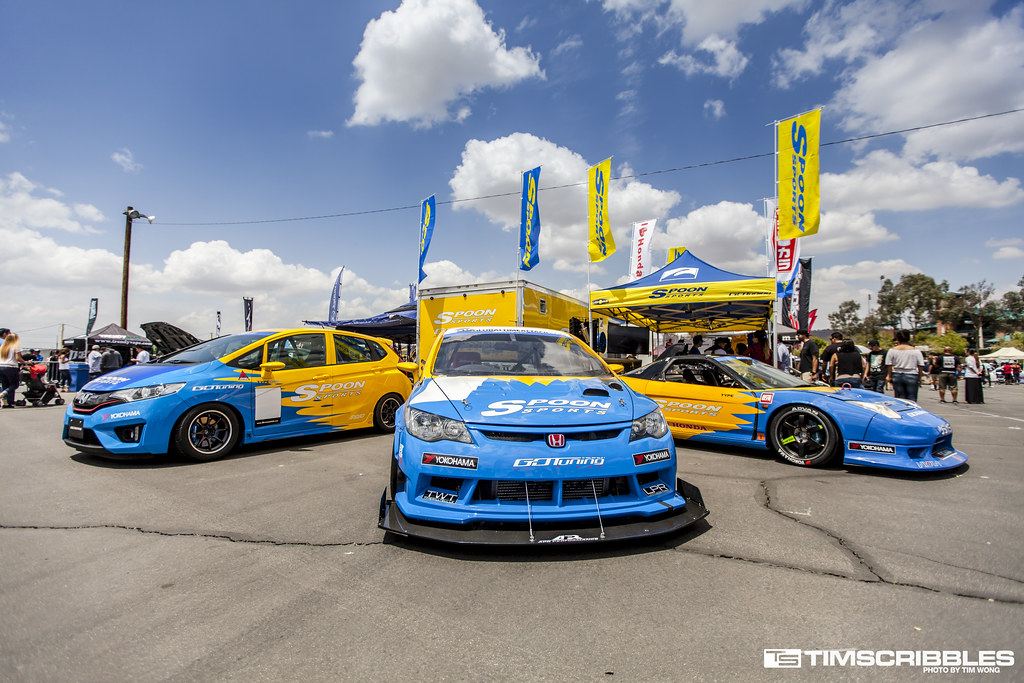 Usually I’m at the Eibach event very early in the morning to beat the traffic and the dozens of caravans, but this year I was coming down from Lancaster after my friend Marco’s memorial service. On my way down, I ran into a road closure and had to double back and cut through Angeles Crest. It was my first run through the notorious canyon highway and it was definitely an interesting experience. There was some fantastic views and some sweet driving roads, but it was dampened by the  massive rocks thrown into the middle of the roads. It was like driving through a mine field; one mistake and you might have a hole in your bumper. During my drive, I did spot a number of spirited driving racing through the opposite side of the road; these cars weren’t like the ones you’d see down in San Diego’s canyon, but rather more like borderline time attack cars with massive aero. My drive did come to a dead stop for a while when the road was closed down. That’s two road closures in a single day and the problem with road closures up there is that there are no alternative roads so it was simply a waiting game. When I finally was allowed to pass and see what all the fuss was about, there was about several fire engines and police cars lining the road and a helicopter flying away. No idea what happened since there wasn’t anything in the news about it. By the time, I actually arrived at Eibach, it had already started and cars were out in full force and flooding the streets of Lake Elsinore. 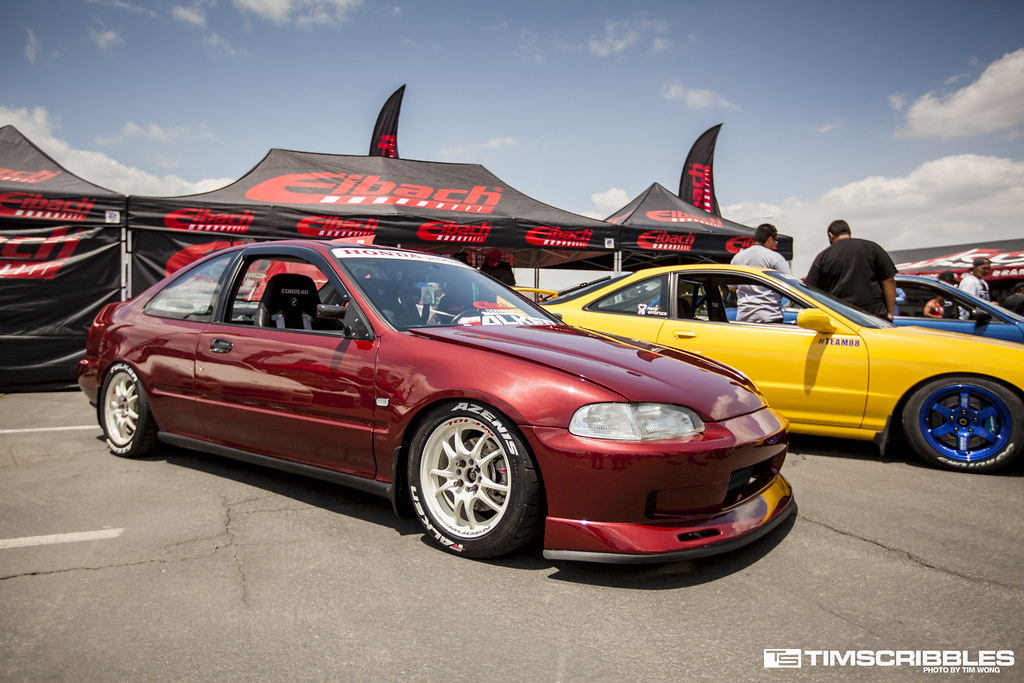 I love how EJ1 isn’t over the top in styling but retains an elegant finesse in its build and there aren’t too many of these on Mugen MF-10s. 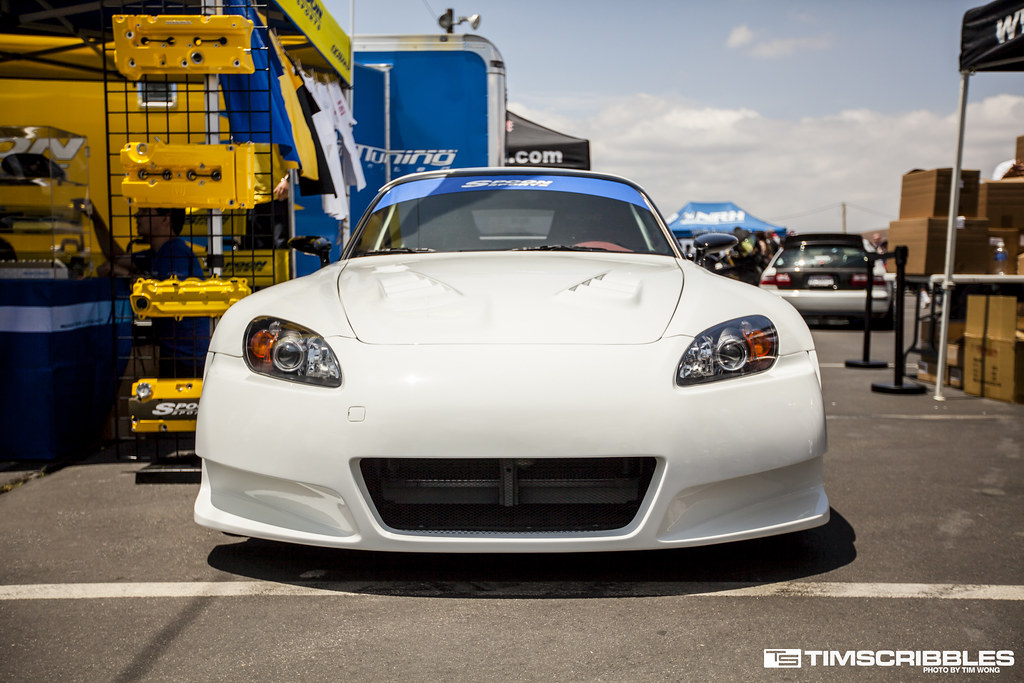 First time seeing this new version of the Spoon bumper for the S2000; I think I prefer the old look with the fog lights. 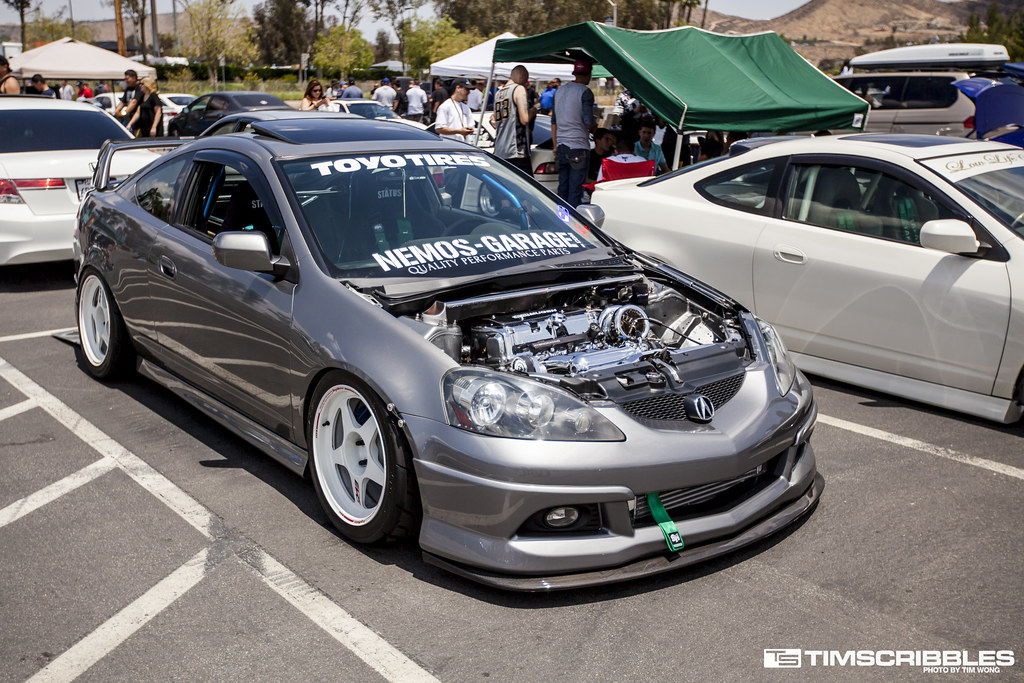 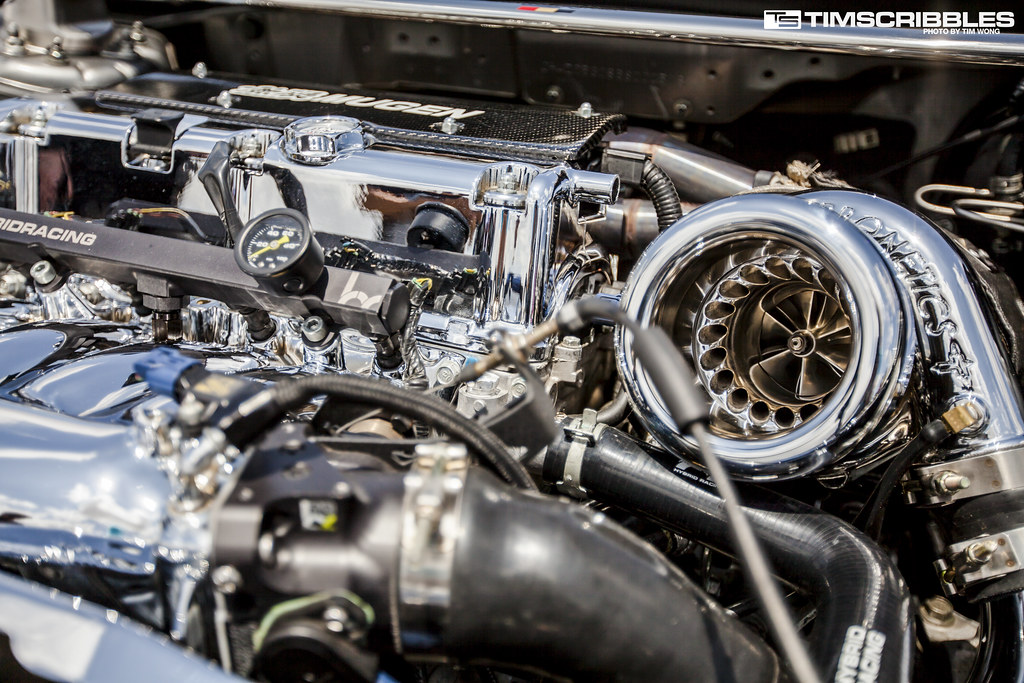 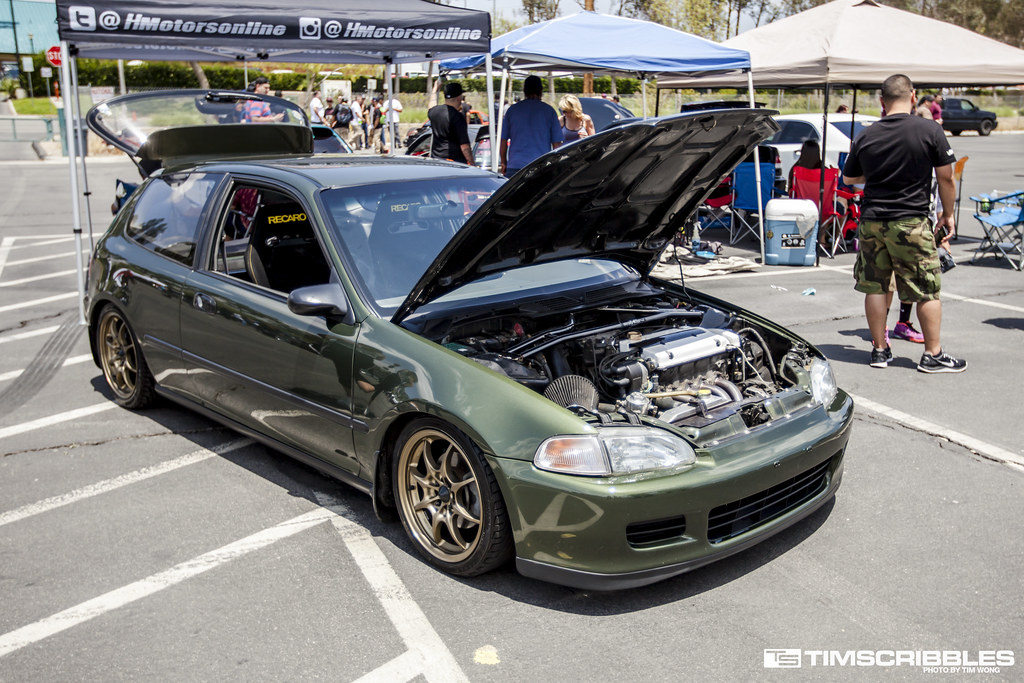 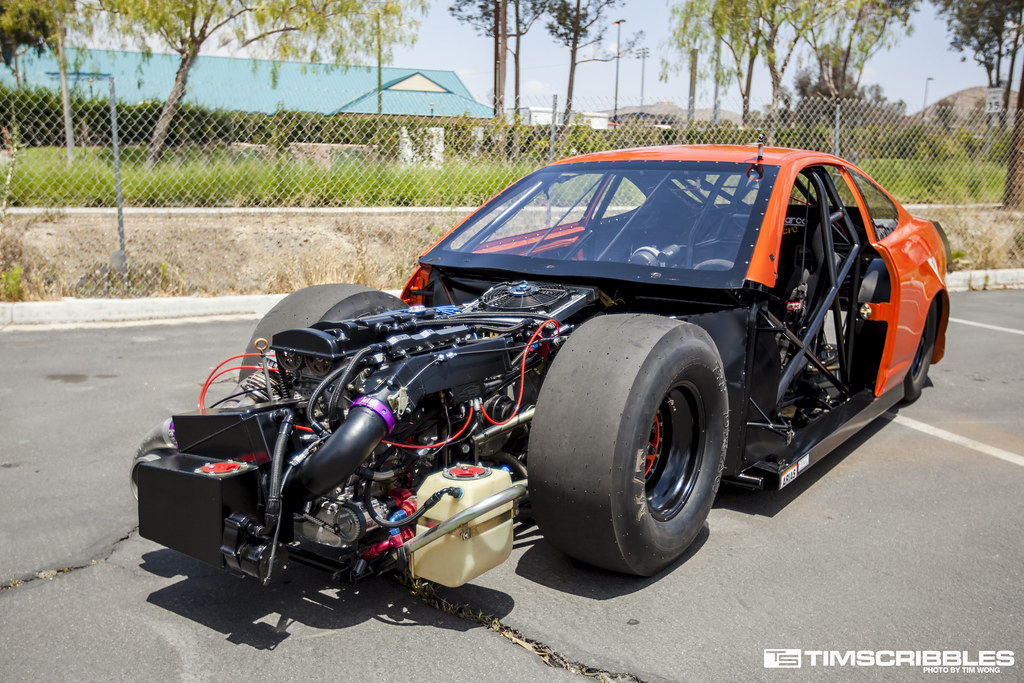 This started out as a RSX until it got this dragster make over. 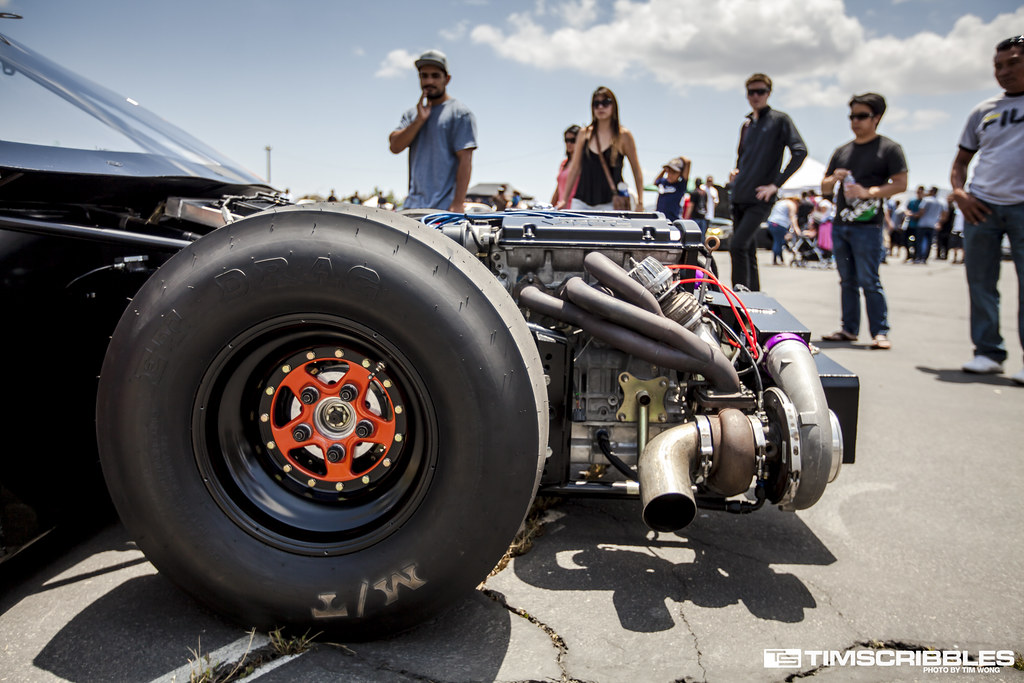 It has a laterally mounted turbo Honda engine and some massive slicks all around. 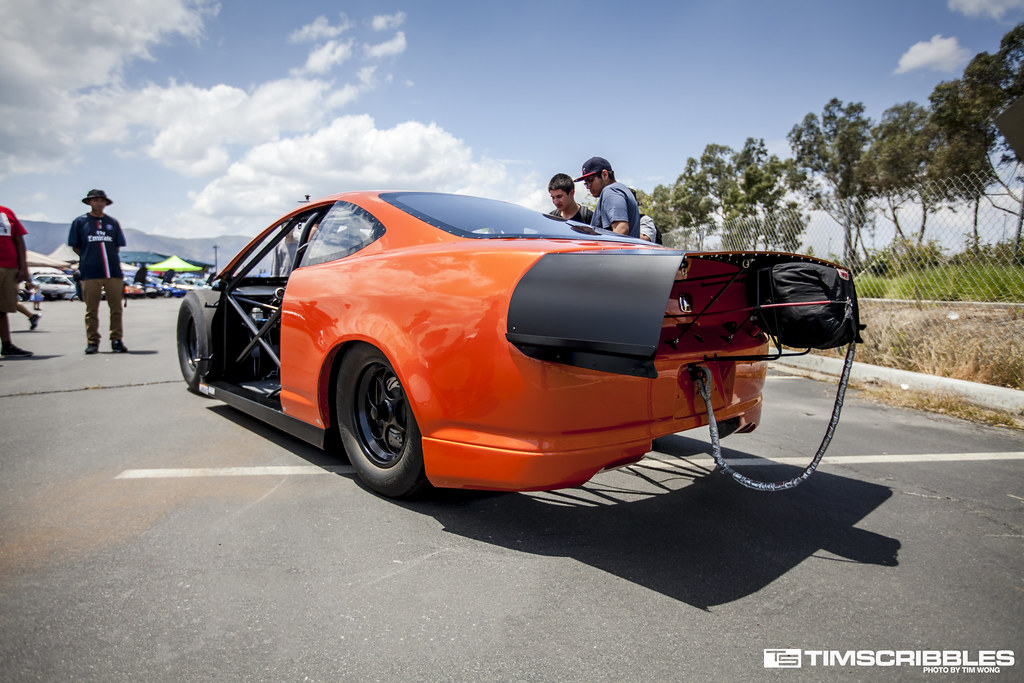 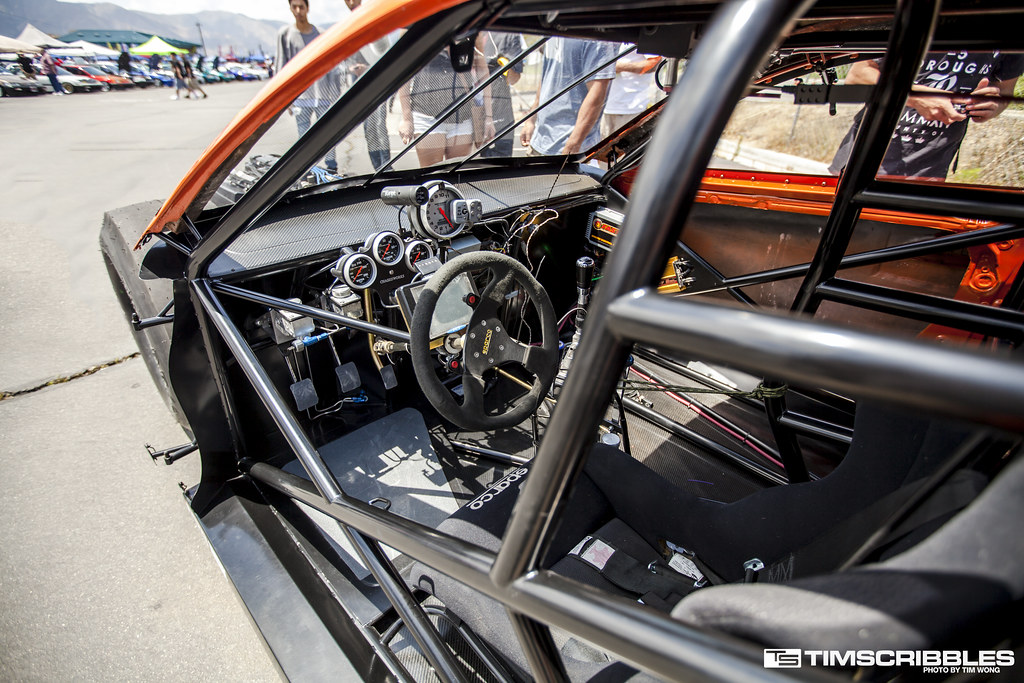 It’s all business on the inside as well. 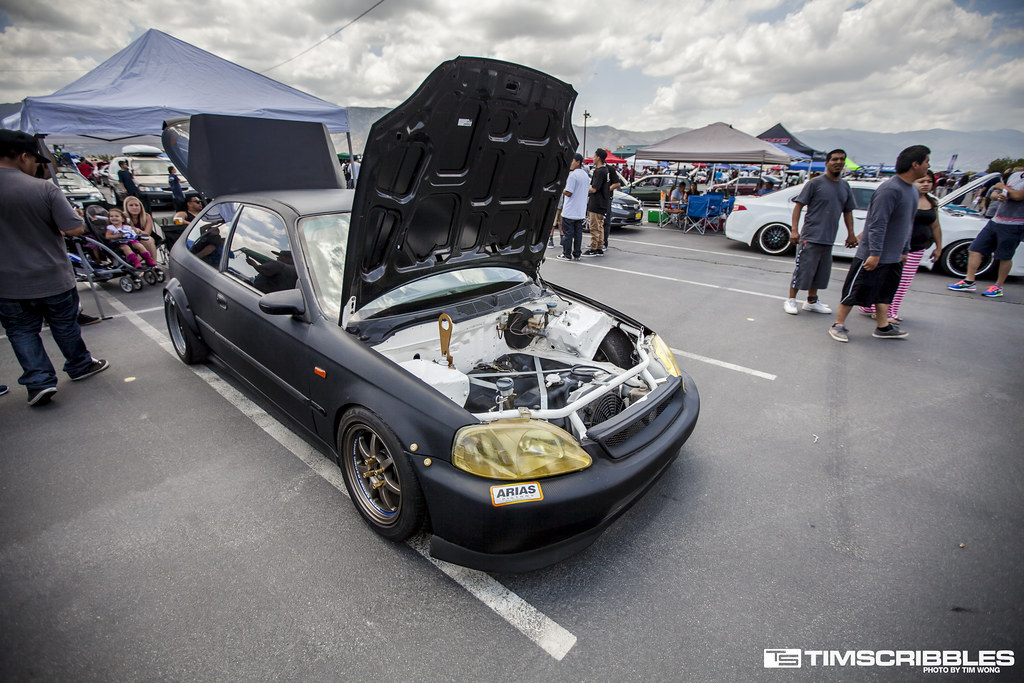 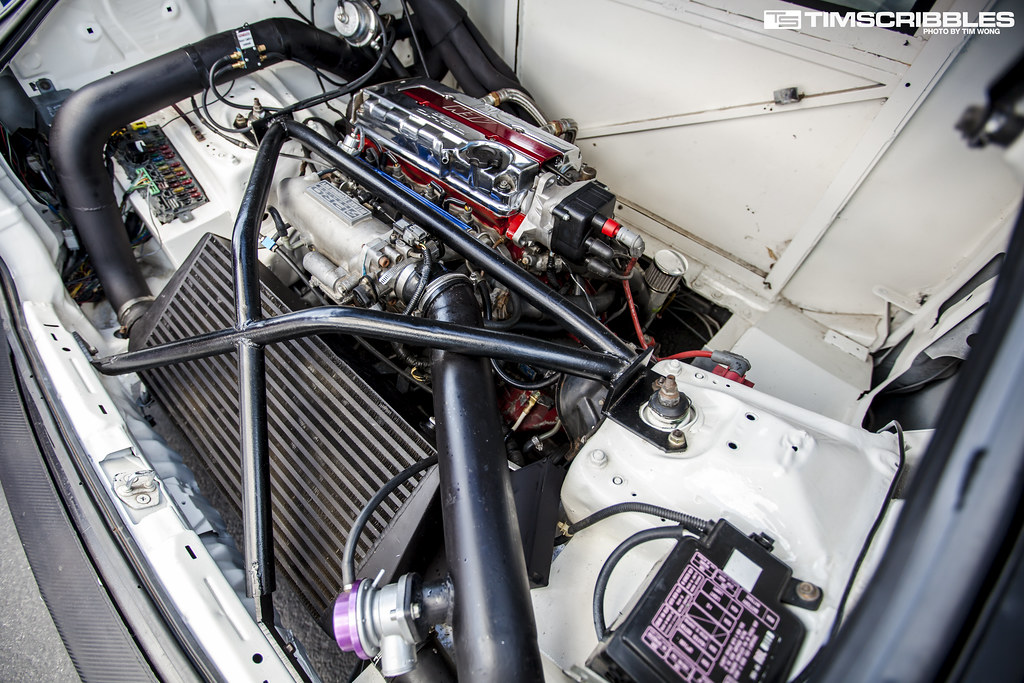 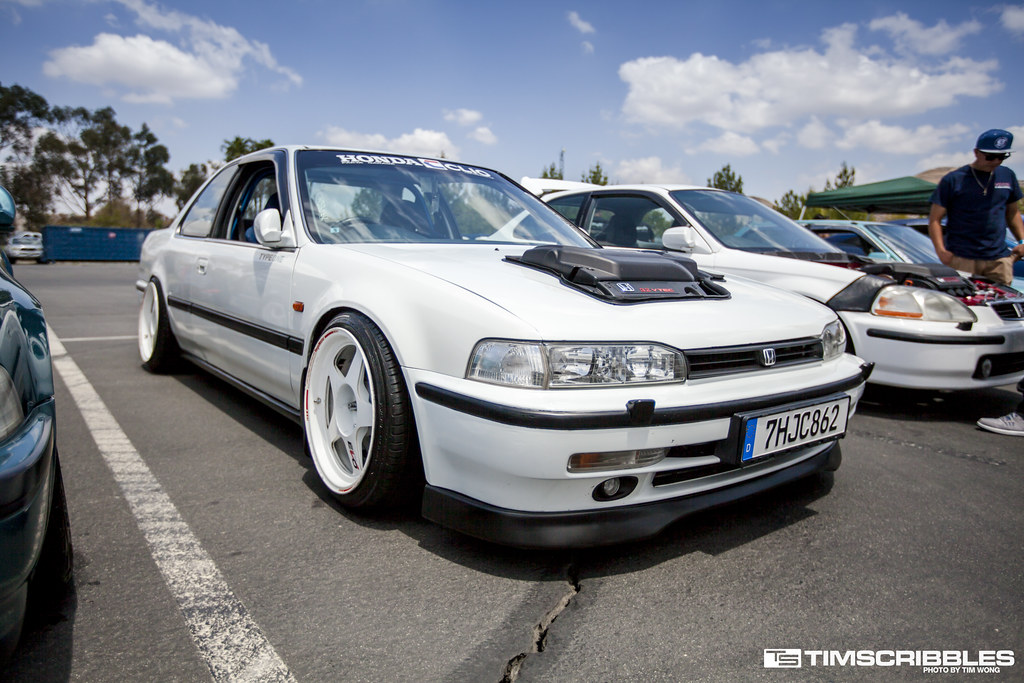 I’ve seen the J-swapped CB7 online a few times, but it’s more impressive in person because of clean work instead of the usual hacked up hood to fit the engine. 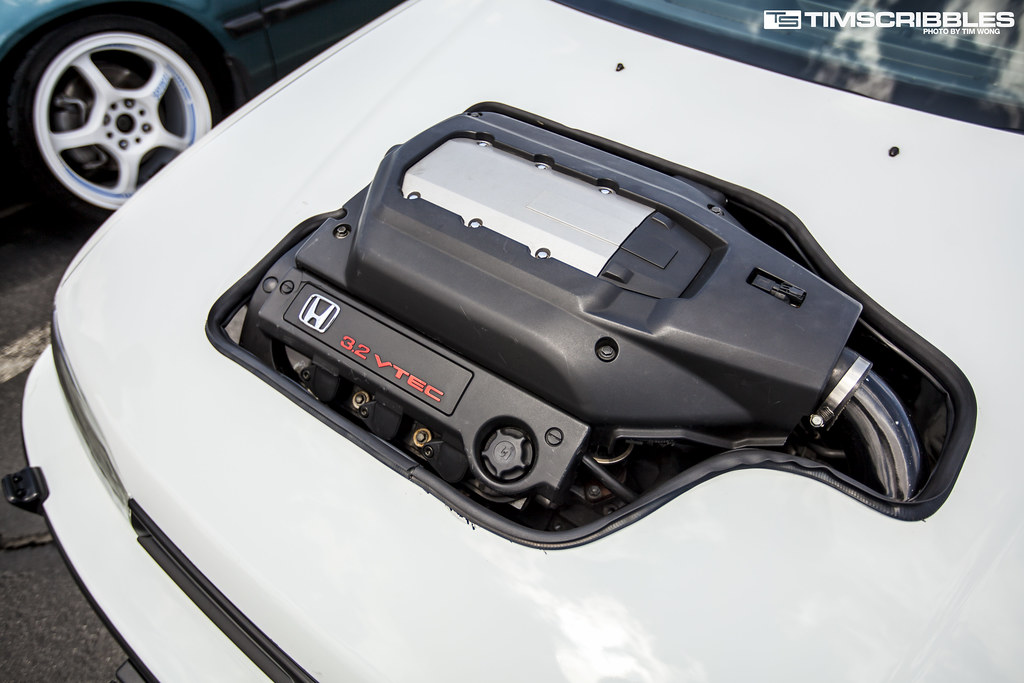 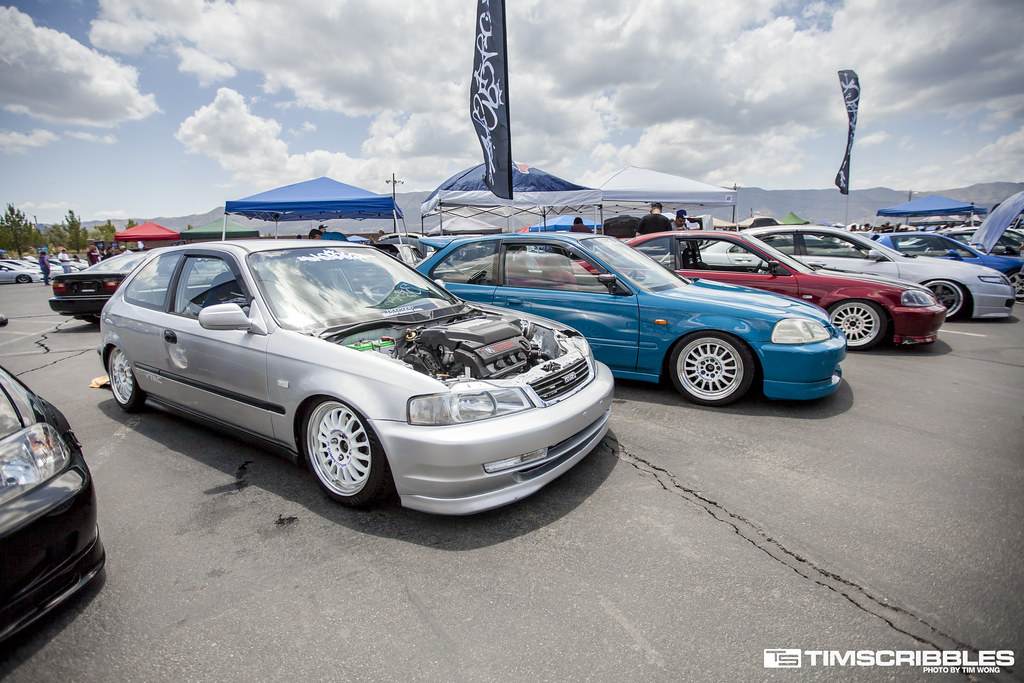 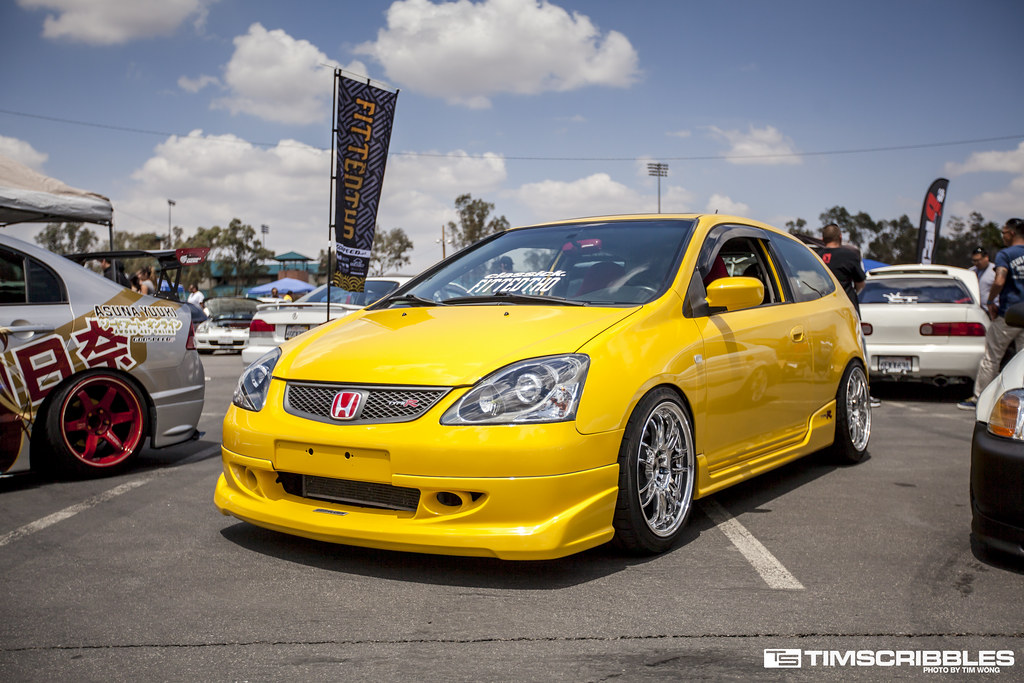 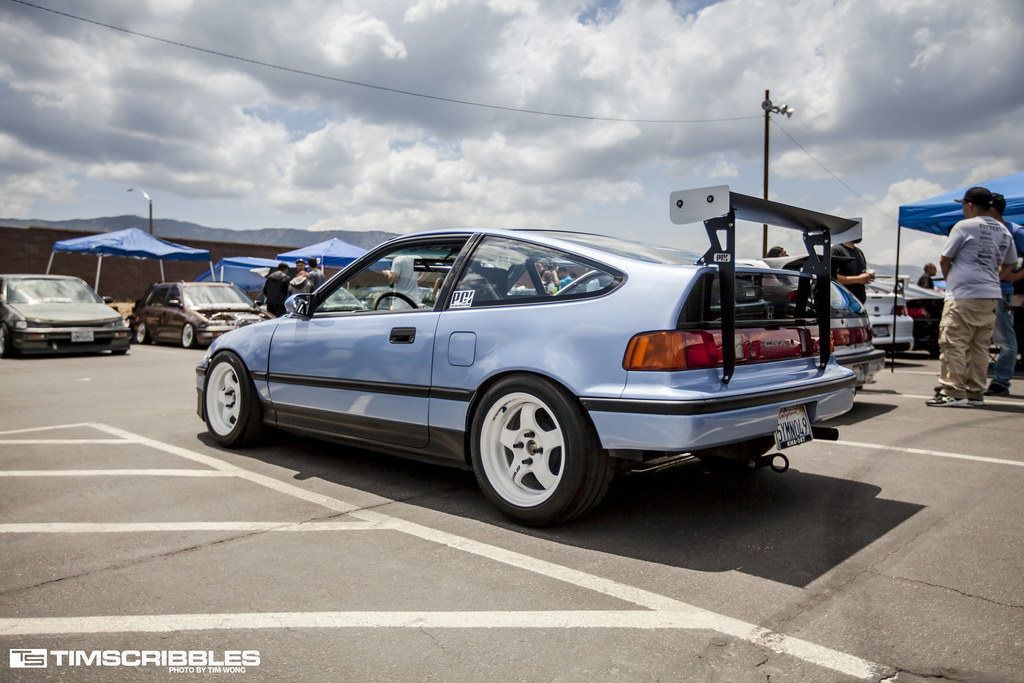 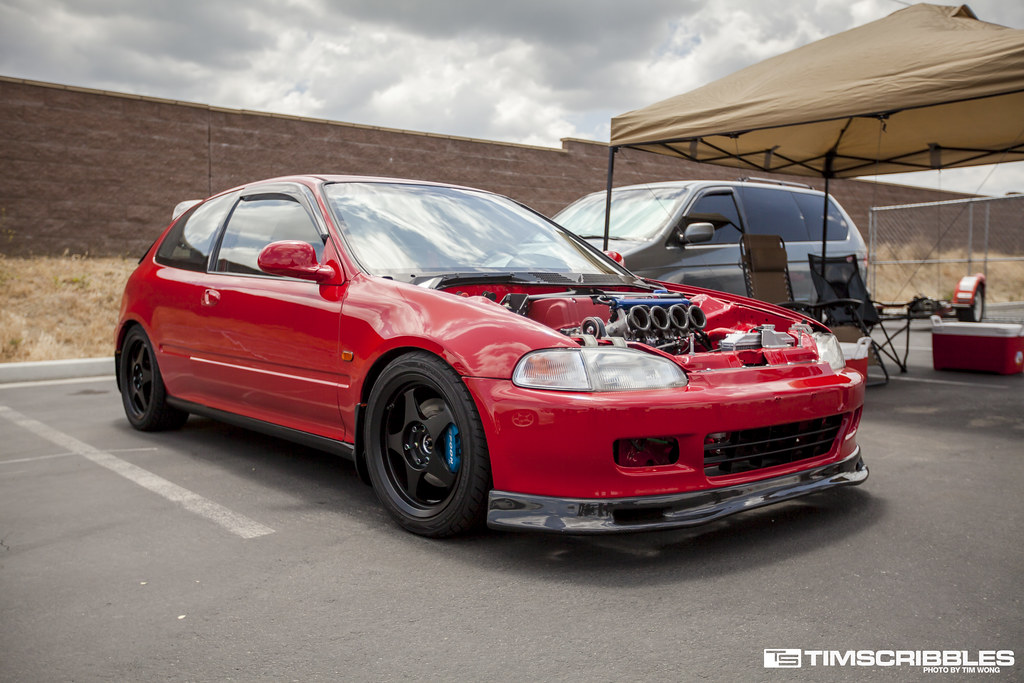 EG on a perfect Spoon wheel and caliper combo. 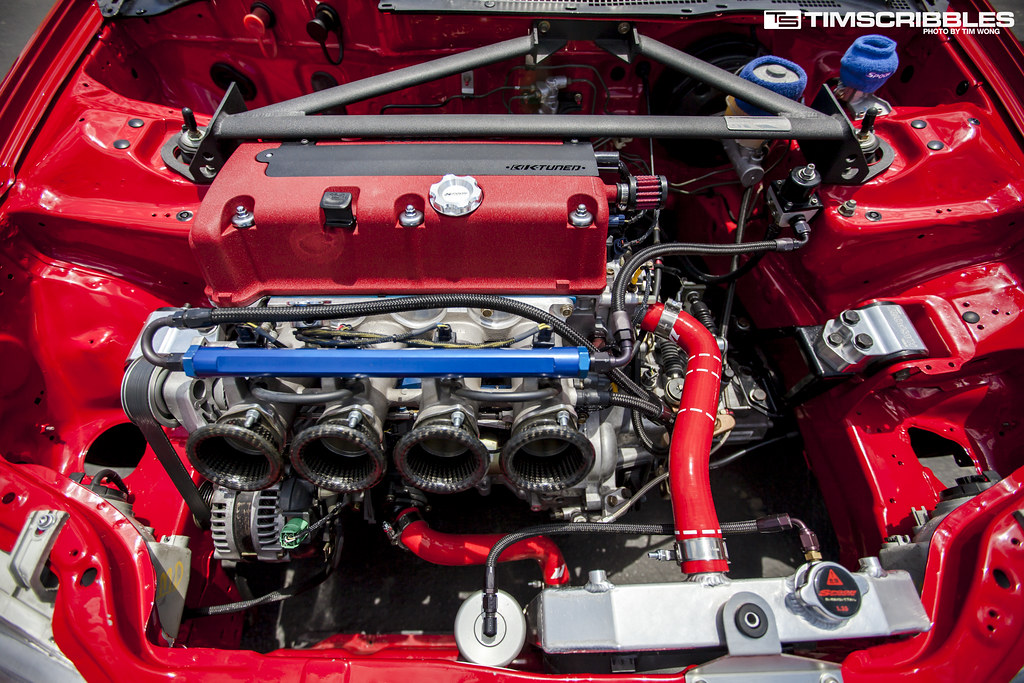 The engine bay is looking great with a ITB’d K as well. 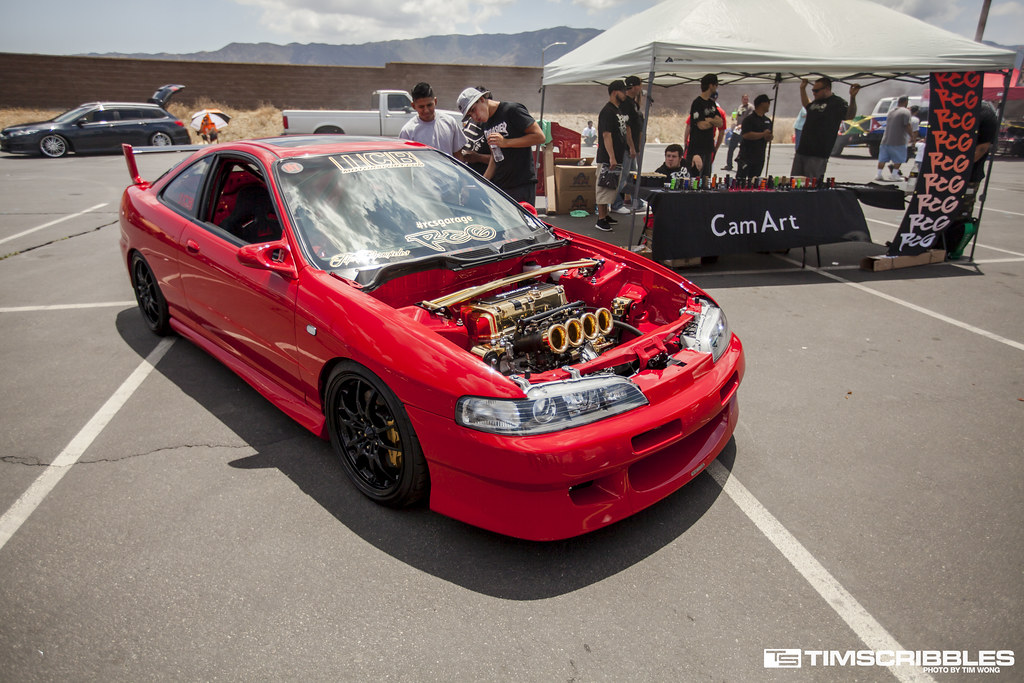 I don’t think it’s possible to every get sick of seeing the RCG Mugen Integra because it is nothing short of perfection. The red and gold scheme gets me every time. 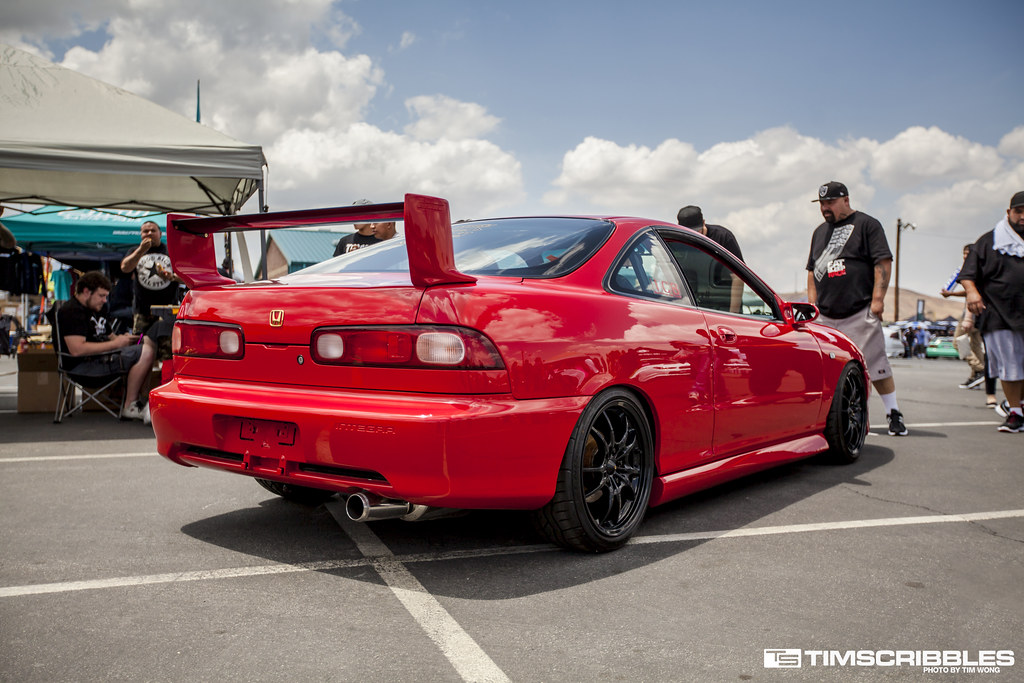 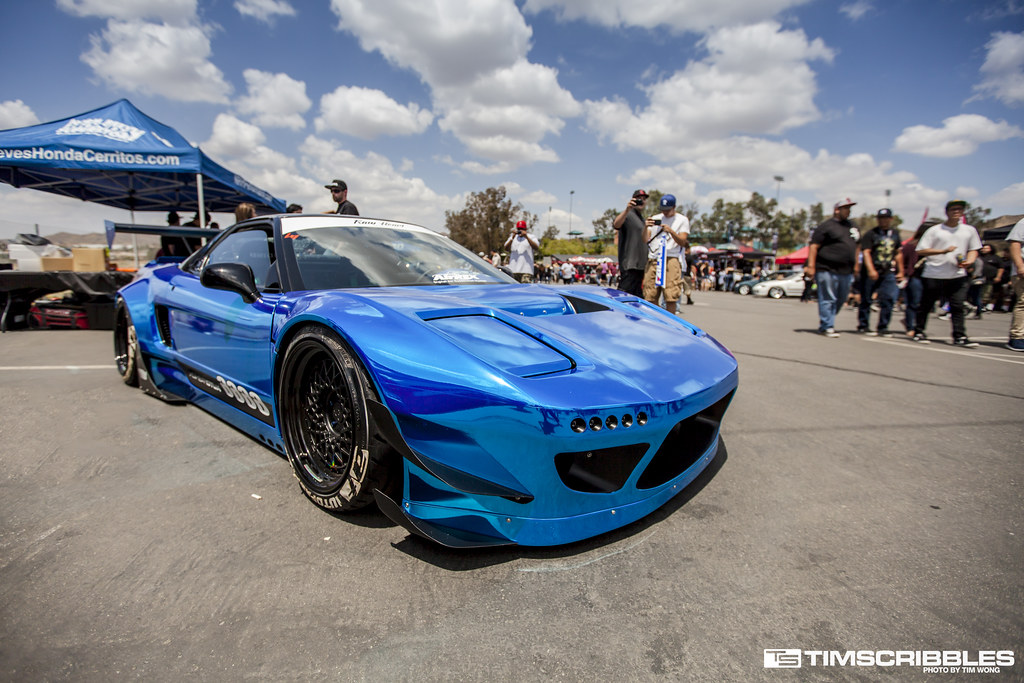 I’ll leave off Part One with the Rocket Bunny NSX displayed at the Autofashion booth. 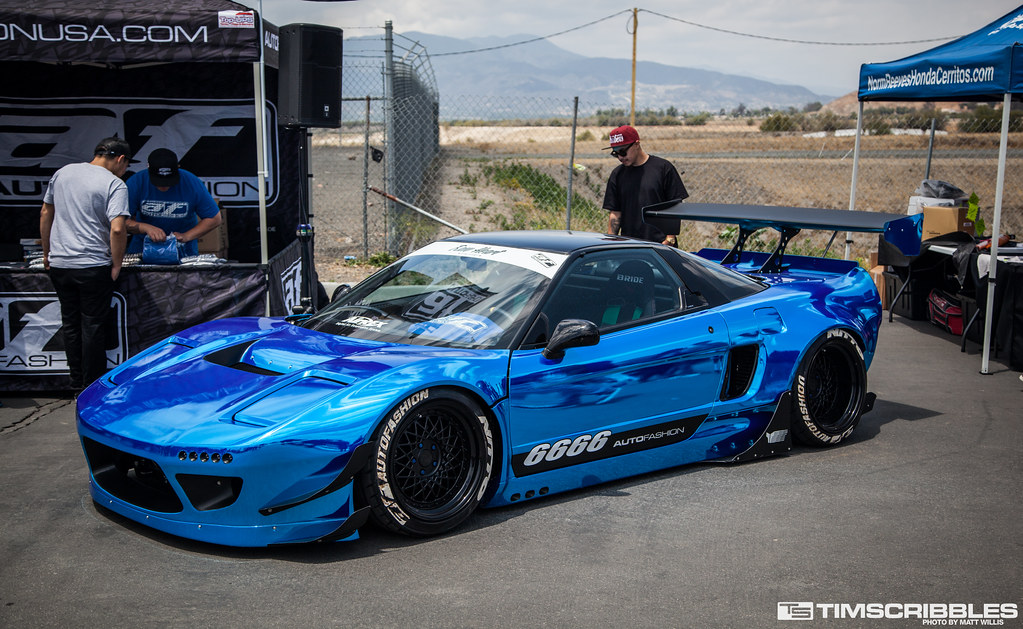